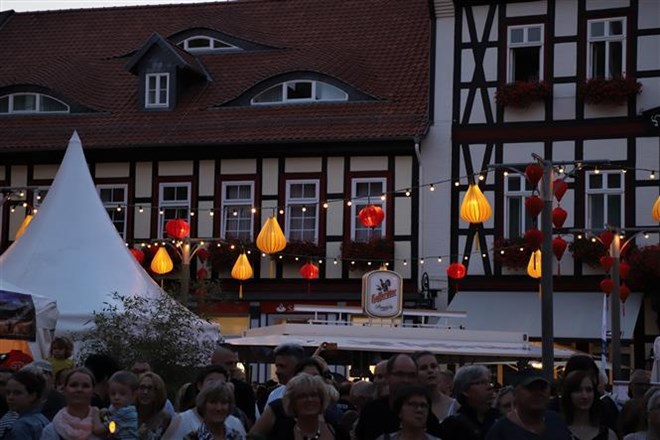 The Vietnamese ancient city of Hoi An hosted a lantern festival at the Markplatz square in Wernigerode town, Germany, on August 24 to mark the five-year cultural cooperation between the two cities.

Speaking at the event, Minister Armin Willingmann expressed his delight at the fine relations between the cities of Hoi An and Wernigerode, stressing that over the past five years, the two cities have hosted a number of cooperation and exchange events in various fields, such as economics, culture, education and environment.

He noted with pleasure that in late 2018, Hoi An and Wernigerode won the National German Sustainability Award 2019, describing it as a vivid illustration of sound cooperation between the two sides.

For his part, Vice Chairman Son highly appreciated the growing development in the bilateral ties, expressing his hope that the festival would help to promote the traditional cultural beauty of Hoi An to the people of Wernigerode and international friends in general, thus contributing to enhancing the strong attachment between Vietnamese and German people.

During the three-day festival, Hoi An craftspeople are lighting up the old streets of Wernigerode with hand-made colourful lanterns. Visitors to the event are also invited to enjoy folk dances, and martial art performance as well as taste signature dishes of the Vietnamese ancient city.

Earlier the same day, Vice Chairman Son and Mayor Peter Gaffet inked a Memorandum of Understanding (MoU) on cooperation for the next five years, during which they agreed to implement the “Joint action program on climate protection and climate change adaptation” and a human resource training program for hotels and restaurants.