When you book with an account, you will be able to track your payment status, track the confirmation and you can also rate the tour after you finished the tour.
Sign Up

Or Continue As Guest

When you book with an account, you will be able to track your payment status, track the confirmation and you can also rate the tour after you finished the tour.
Sign Up
545

Why Book With Us?

Do not hesitage to give us a call. We are an expert team and we are happy to talk to you.

Stone Valley Golf Resort is an eighteen-hole golf course designed by Brian Curley of Schmidt-Curley Design. The location is 65 kilometers from Hanoi, and it takes around 1.5 hours to reach the golf course from the center of town.

Truong An Golf Company is the developer, and it’s their first golf course in Vietnam. The par-72 course plays 7,280-yards from the back tees and features Celebration Bermuda grass fairways and tees, and TifEagle greens.
The near-200 hectare site lies in a region known for river tours that weave through valleys between massive, vegetated mountains, and has served as the location for feature films, including King Kong. The site offers beautiful views from every hole. Stunning views over inland lakes that resemble Ha Long Bay are visible from the closing holes.

The greens feature some very dramatic shaping including slopes and ridges as well as bowls and backstops, but always with fairly flat pinnable areas. The contours generally help balls get to the flag and are more intimidating than real. Fairways more often than not have kick areas that shoot balls forward towards the greens, making longer holes play shorter than their yardages.

The front nine features extensive low-flow networks of streams and extensive lakes. Some holes have exposed sharp-edged rocks resembling lava fields. These rocky areas come into play on holes six, seven and eight. The driveable par-four seventh hole requires carrying a vast field of rocks to hit a speed slot fairway that directs the ball to the green. The latter has a dramatic 1.5-meter drop to a back, bowled-out lobe.

The back nine comprises some of the best and most dramatic holes. They include the short par-four fourteenth hole that requires carrying not one but two significant ridges to reach a landing area and green. The course builds to a crescendo, with its four final holes playing from the highest elevations, with views across the valleys and mountains.

The par-three fifteenth features very dramatic green contouring and a friendly kick-slope at the back, sending balls to the pin. Hole sixteen begins with a spectacular drop shot with the clubhouse in the near distance and turns right to a fall-away green with a strong backslope to contain shots. The par-three seventeenth and long par-four eighteenth play around the original quarry site, offering stunning views of contrasted turf, sand, rock, water, marsh, and natural outcrop backdrops, all with the high mountain vistas.

Facilities at Stone valley are first class with a large clubhouse overlooking the front nine serving as staging and main center of attention. Locker rooms are as expected from a private members club. The restaurant could have a better food selection but is more than adequately stocked with cold beer and Vietnamese delicacies. Caddie service is excellent, though there is hardly any English spoken.

Stone Valley is unlike any other Hanoi golf course. The views alone are worth the drive, but with a fun round of golf and top clubhouse added in, Stone Valley a no-brainer to include for every golfer visiting Hanoi. 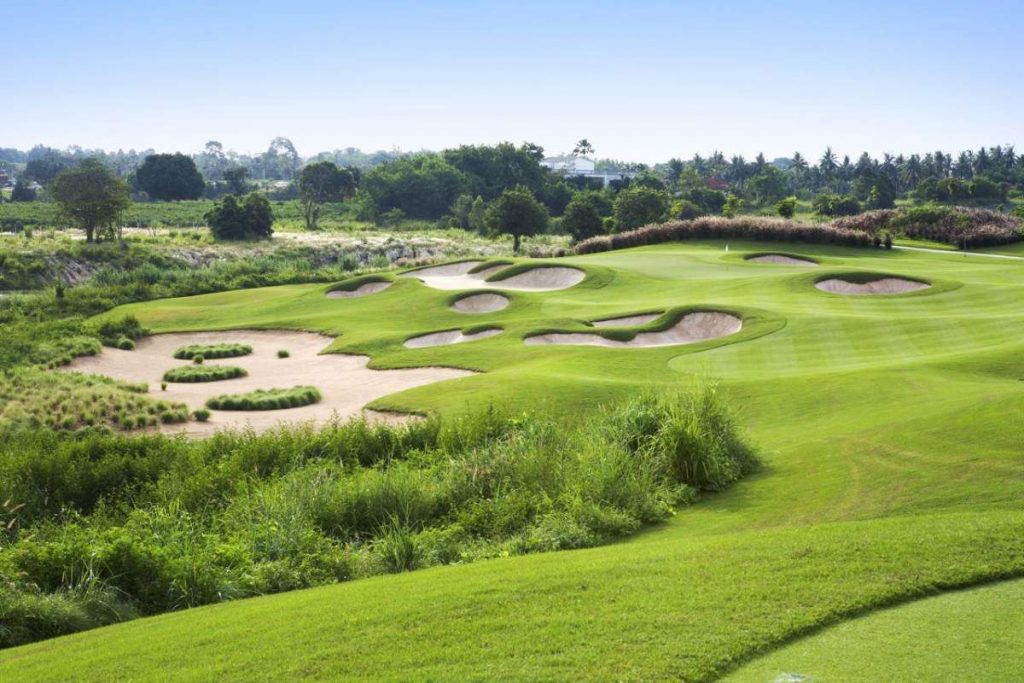